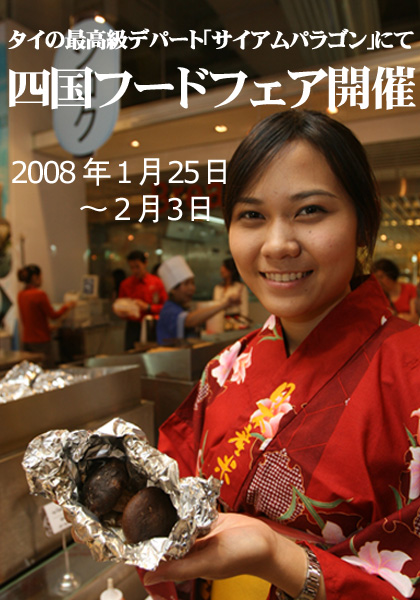 The assistant of an interpreter, Ms. Mai with a smile, offered grilled “Shiitake” mushrooms of Ehime wrapped in foil.

“Shikoku Gourmet Fair” was held on the food floor of Siam Paragon, Bangkok for 10 days from January 25, 2008 through February 3, 2008, which is the largest premium department store in Thailand. The Shikoku Gourmet Fair was sponsored by “Saijo Industry & Information Center for Support ” of Saijo city. Our company purchased intended use of merchandises in Japan, exported them to Thailand, and arranged with importers of Thailand as its key roles for the Shikoku Gourmet Fair.

The Shikoku Gourmet Fair is also introduced in their website of the Saijo Industry & Information Center for Support. (→click here) 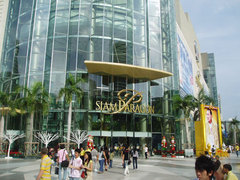 Siam Paragon, known as advertising slogan of “The pride of Bangkok”, is a large complex of shopping mall in which have high premium brand tenants and department stores opened in 2006. 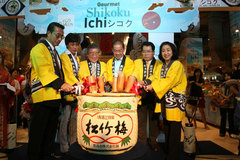 During opening ceremony of the Shikoku Gourmet Fair, Mr. Kotaro Ito (the Mayor of Saijo city) had a speech, and then Mr. Tanaka (the Vice President of Saijo Chamber of Commerce and Industry) joined to open a barrel. 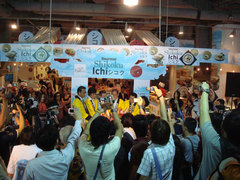 TV stations and the press rushed to cover the event. 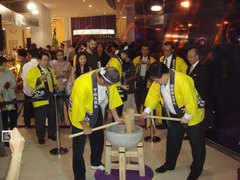 They are the staff that rushed to come from Saijo city to support the event, “Mochitsuki” (pounded steamed rice into rice cake). 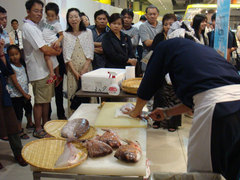 “Tai” (sea bream) of Uwajima was air-freighted, prepared in front of guests and sold on the spot. 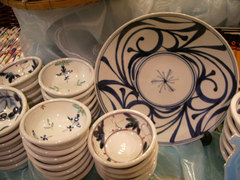 We also arranged regional products of Shikoku such as towels and “Tobeyaki” potteries (brand name of pottery). Popsicles made in Saijo. The juicy popsicles sure hit the spot in Thailand where the temperature was 35℃, whereas 10℃ or less in Japan then. 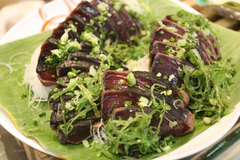 Kochi is known for “Katsuo-no-Tataki” (slightly grilled fresh bonito). It was rather popular as well as “Ponzu” (sauce containing soy sauce and vinegar or citrus juice) among people of Thailand. 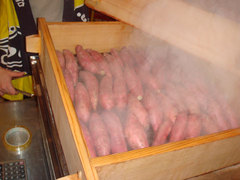 “Naruto-Kintoki” (steamed sweet potato) was seasoned with a bit of salt, which made it even sweeter. It was popular that female guests surely had a weakness for sweets.

“Atago Gaki” (a kind of persimmon) was presented for the first time in Thailand. A persimmon seemed to be liked among people of Thailand. These were “Shirasu” (dried young sardines) and “Chirimen” (boiled and dried baby sardines) that had caught in the Sada Promontory, Ehime. A croquette, known as one of the regular western-style foods in Japan, was also very popular in Thailand. Croquettes were completely sold out then! 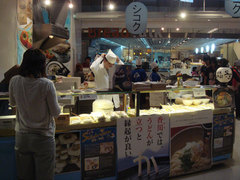 We sold packaged of “Sanuki Udon” (thick white noodles made exclusively in Kagawa), and also served a bowl of Udon noodles in soy-flavored soup as soon as they were boiled. The event was held in the best location, which cut across a large food court from the entrance and on the way of going to the department store. “Anpo Kaki”, made from an astringent persimmon, was very popular for its refined sweetness. We also served apple pies, as soon as they were deeply fried on the spot. We served a bowl of pork miso soup as a trial sample of its taste to our guest, which was intended to be publicized. The soup was cooked from an orthodox miso, made from “Hadaka Mugi” (a kind of barley).